Path of the Gods from Agerola to Positano, famous throughout the world by lovers of trekking

Path of the Gods from Agerola to Positano, a short distance from the B&B Il Nespolo, one of the most beautiful hiking and nature walks, known all over the world

A stay at our B&B in Amalfi Coast will allow you to discover the unique trekking trails in the world, including the famous Path of the Gods. 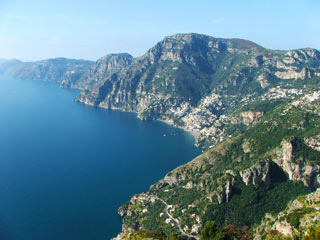 Path of the Gods.

Is one of the most spectacular paths of the Amalfi Coast. It owes its name to the numerous temples dedicated to Minerva, Mitra and Ceres, which stood in the Roman era, along its route. From B&B Il Nespolo you reach Bomerano (Agerola) until to arrive to Positano, through Colle Serra and Li Cannati (7 km – medium 3 hours). It passes under the “Biscuit Cave” where, in addition to the particular geological rock, you can admire secular cave houses built in the cave. After the Colle Serra there is an enchanting scenery of “Li Galli”, the legendary islands of the enchanting Sirens of Ulysses, on the Sorrento Peninsula and Capri in the background. Continue passing the locality of Li Cannati to reach Nocelle and Montepertuso and then down to Positano through a long staircase. Continuing you can get to the beach of Positano. 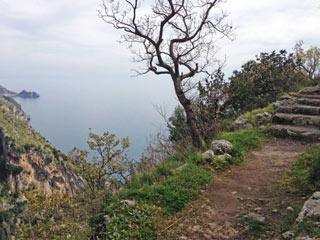 The Path starts from the Moressa Vigne, for the ancient “Via Piano” and enters into the valley of Praia. The old home of Blackbeard (a kind of astrologer-meteorologist, lived up to the 50s) is reached in a short time. Begins just beyond the village of Praiano and the road, which has become a comfortable walk, leading to the square Moressa and from here to the main road. Driving time: 40'. 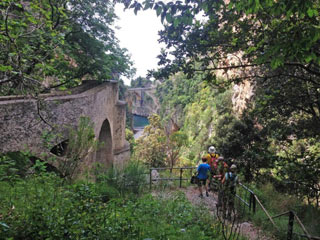 Path of the Crazed Bats.

From B&B Il Nespolo Furore, retracing the ancient ways that fishermen and farmers used to go from the beach to the town on the coast. Along the way we meet the palace of Maccaronari, the Monazeni, the ancient warehouses. Along the path you find an old paper mill surrounded by the nature. Bats love to take refuge in this place, by day, to rest undisturbed. Continuing on, the trail climbs on the cliffs until you reach a plateau called Punta Tavola which offers spectacular views. Driving time: 1 hour. 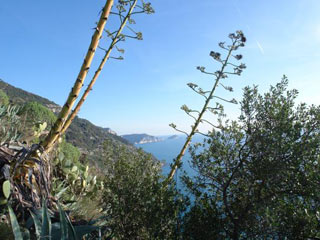 Along the romantic “Walk of Love” from the church square of St. Elias in Furore, you reach the panoramic viewpoint of Punta S. Elia. Following the old staircases, the scents and colors of the Mediterranean you walk up to the bridge of the main road of Praia. Driving time: 1 hour. 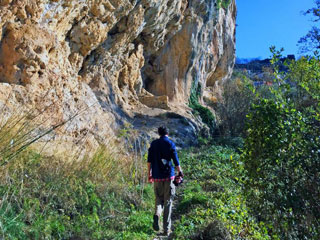 The trail passes through Pine ravine and different scenarios: the typical vegetation of low mountains replacing the Maquis and where it was possible to man, with hard work, he built terraced fields where still today are cultivated vineyards which produce excellent wine grapes Amalficoast Dop.
Frosm apartment Casa Generosa you get to Tuoro (suburb south west of San Lazzaro of Agerola) take the paved side road that curves down to the side of the canyon Penise-Schiato. Finished the asphalt, we continue straight, with the easy path (also known as Abu Tabela Path) walking to the base of the cliff. After about 700 m you reach the bottom of the gorge and near the ruins of an old mill, you can cross with a leap the narrow rocky riverbed of the Rio. Passed on the other side, you continue walking following the main path until you reach the first houses of Furore (so called “Pino”). Driving time: 2 hours. 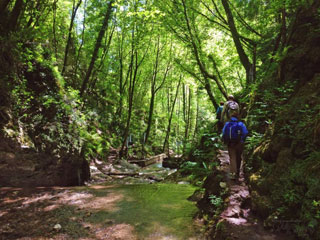 The Ferriere Valley is a State Natural Reserve where there is a special microclimate that hosts vegetation of mixed forests of alder and hornbeam. From apartment Casa Generosa reach the General Avitabile square in the hamlet San Lazzaro. From here take Miramare street and after 50m turn left and follow Radicosa street following the CAI signs. Follow the signs toward Mount Murillo; here the road climbs into the woods with the stairs in limestone rock, among the terraces and chestnut woods. After the climb go straight on the ridge and at the first fork, keep right. The trail continue on the flat and downhill through the Santa Croce valley. Following the CAI signs you reach a stony ground where flows the Acqualella spring. Along the way you can see the ruins of the old ironworks from which the name of the valley and the ancient paper mills.With a length of about 10km and a difference of altitude of about 150m uphill and 800m downhill, it takes about 4 hours to reach the natural reserve, and another hour to reach the city of Amalfi. Driving time: 4 hours